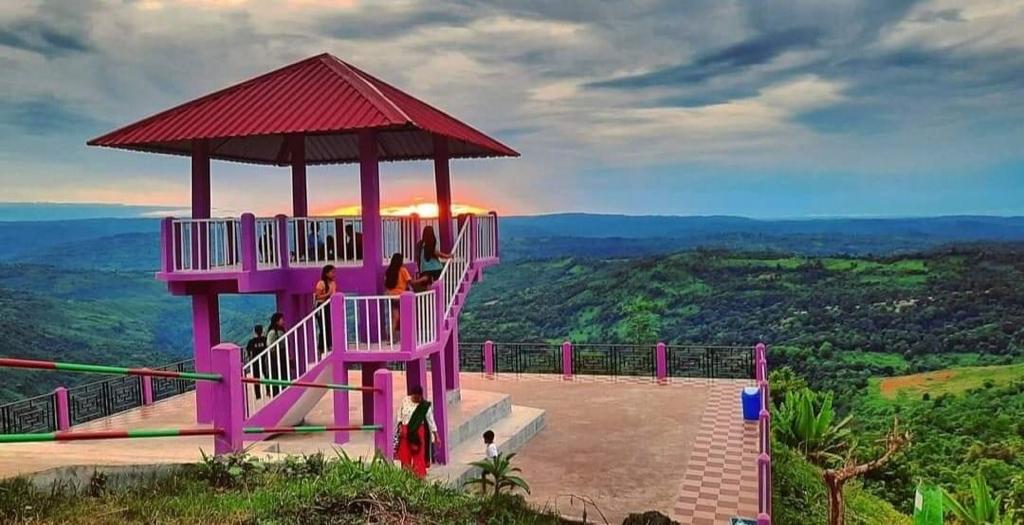 Haflong the Hill Station of Assam

Haflong is the headquarter of Dima Hasao Autonomus Council in the state of Awesome Assam. It is considered to be the only hill station in Assam with British era charm for experiential and mindful Tourism. Haflong is a Dimasa word meaning White ant hillock.

Mystical Haflong is a picturesque hill station that is surrounded by numerous beautiful lakes, waterfalls and lush green forests. Haflong is a dream destination for nature lovers and soft adventure enthusiasts. At an altitude of more than 700 meters above sea level, it is an ideal getaway for a leisure trip. Majestic views of the Borail range, tribal culture, birding, hiking and camping are major attractions of this place.

Haflong can be visited round the year with the water bodies and forests becoming live during the monsoons, while making it ideal for outdoor activities during the winters. The beauty of this relatively undiscovered place cannot be expressed in words until you are here.

Haflong is connected to Guwahati (335kms/7hrs) by a 4-lane express highway through beautiful landscapes and the 1.7 kms long Maibong – Mahur tunnel of NH 54. Enroute stop by the sugarcane fields to see how jaggery is produced locally. View of Borail Range and Diyung Bridge from Haflong circuit House is awe-inspiring.

Visit the Haflong local market where mostly women sell their Jhum products – wild varieties of Mushrooms, Pineapples, Garlics, Turmerics, King Chillies, etc. from the nearby villages still using the traditional way of weighing. Drive to the town of Maibang situated on the bank of Mahur river to see the unique stone house built out of a single stone by the Dimasa King.

The beautiful Haflong Namghar (neo Vaishnavite assamese Monastery) beside the lake situated at the heart of the town gives it a picturesque look with facilities for boat ride. Visit the Presbyterian Church of Haflong during the Christmas to see how the decoration gives a festive look to the whole valley. Breathtaking view of the magnificent Fiangpui church from the Muolpong View Point is an add-on.

The walls of the Haflong town are painted colorfully with motifs of the tribals patterns that are usually woven in their dresses and couples on the way to the District Museum. There are 13 tribal groups like – Dimasa, Kuki, Hmar, Zemi, Karbi, etc, and along with few other non-tribal communities.

Jatinga view point and Church are worth visiting. Visit to the Jatinga Interpretation centre for birds to learn about the famous phenomenon of birds committing suicide. Visit to the Model Ethnic Village is an option where cultural programmes and feast of local food and drink can be arranged with prior intimation to the authorities. Tourist can collect traditional souvenirs as well. To learn about the traditional rituals and weaving techniques would be also interesting as a part of Rural Tourism.

Paragliding is a go-to sport for thrill seekers while birding enthusiasts find a treasure trove in Gunjung. See the ancient stone jar burial sites of the Dima Hasao at Lungmailai.  In the entire world only Laos and Philippines have such type parallel examples. But it can be presumed that the jars were built as repository of cremated human remains, related to mortuary practice. The jars were made from sand stone block with the help of metal implements. In fact the Zemi Naga of present Dima Hasao District collected skeleton remains of dead from primary burial and buried in under megalithic structure. Study and research of the stone jars of Dima Hasao traces out the migratory route of mankind from South East Asia to North East India. A unique and uncommon tradition not found anywhere in India, is an archaeological asset of the state of Assam. Bendao Baglai Waterfall in Samparidisa village is a palace for numerous species of exotic butterflies.  There are many hot water springs in and around these places of which the water is considered to be of great medicinal benefits.

Judima Festival named after the locally vinified wine of this region is held every year in the month of December. Here traditional games, dresses, ethnic food, Judima, etc. are exhibited and sold.

Umrangso Golf Course and Lake is a beautiful God gifted natural Heritage. Amur Falcons makes their temporary home here on the banks of the Kopili River and migrate out during the month of November towards South Africa across the Arabian Sea.

Panimur, also known as the mini Niagra falls of North East is the place where shooting for Bollywood movie – Rangoon was done. Here the Kopili river transforms into a thrilling waterfall and it is a hotspot for watersports activity like Kayaking, but with professionals only.

Visit to the DSA stadium the walls of which is a series of mushroom domed pillars depicting the Ruins of Kachari Kingdom of Dimapur, Orchid garden and Sontila tribal villages are Photographers’ delight. Thuruk is the only village is this district to get snow for a very short period during the winters.

Haflong has a 3* deluxe property by the name of Landmark Hotels. Few government lodges and standard homestays are also available. The town has few cafes with rustic views of the landscape. Enjoy a wonderful evening under the sky with Judima (a local rice brew known for its taste and flavour) accompanied by Folk Tales from the Guides and cultural programmes followed by ethnic dinner.

Apart from the newly launched Vista dome Service from Guwahati to Haflong twice a week both ways, there are many other trains to this scenic place after the renovation of meter gauge tracks to board gauge.  Even the New Haflong railway station is beautifully located in the lower valley of the  town.

The railway track is historic and has heritage value. The erstwhile Meter Gauge track built by the British in the late 19th century between Lumding and Haflong and onwards to the Barak Valley was an engineering feat as it took 16 years to complete crossing 37 tunnels. The route covered a serpentine hill section going through green forests, rivulets and streams, and mounting the highest ridge of Jatinga known for its oranges and bird phenomena. It was converted to a Broad Gauge section since 2014-15 and now crosses 20 tunnels. In the colonial days it was an important railway track for the landlocked region to move tea, coal and timber to the Chittagong port of Bangladesh.

We vouch for Responsible Tourism in such sensitive places by restricting the movements of tourists to a limited group size as per the carrying capacity of the destination so that the tourists doesnot leave any negative impact on the culture of native people or disturb the pristine nature thereby aiming Tourism for Inclusive growth .

Please note – The Special train of NF Railway with one Vistadome coach and 4 AC Chair car coaches has started operating from Saturday, 28thAug’2021 on the Guwahati to New Halflong route. The special Vistadome train service will run between Guwahati – New Halflong section with stoppage at Maderdisa and Maibong stations. Initially, it will be a twice a week service i.e. on every Saturday and Wednesday. The frequency can be increased based on the overall response of tourists availing of the service. Besides the Vistadome coach, the train will also have air-conditioned chair cars. It will be an exclusively reserved service with the provision of advance booking. The train will depart from Guwahati at 6:35 AM and reach New Halflong at 11:55 AM covering a distance of 269 km through the North Cachar Hill region. The return journey from New Halflong will commence at 5 PM and arrive at Guwahati station at 10:45 PM.

The fare for the journey by the Vistadome Ex Guwahati to New Halflong will be approximately Rs.1130 (One Way) and the fare for the AC Chair Car will be Rs.470 (One Way) only. However, the main concern is the 5-hour layover at Halflong to allow passengers to see the sites in and around Halflong before they ride back to Guwahati late in the evening. Halflong is at a very nascent stage of tourism development and there’s a dearth of tourism facilitators and facilities, including tourist taxies, restaurants, local guides etc. NF Railway would have done better to work with local stakeholders so that visitors receive some quality services from the get-go. We shall see how things develop. This one train has the potential to give a great boost to local employment generation and development at Halflong and other nearby places in the Dima Hasao district of Assam. There are a few other routes within Assam that are being considered by NF Railway for similar special train operations in future.

For more detailed information and customization of the package please do get in touch with us.

For any queries please contact the below mention address:

This error message is only visible to WordPress admins

Please go to the Instagram Feed settings page to create a feed.